As published in The Smithsonian, Newsweek and Scientific American. MSU FRIB faculty members Artemis Spyrou, associate professor of Nuclear Astrophysics and Wolfgang Mittig, professor of Physics, wrote this piece for The Conversation, an independent collaboration between editors and academics that provides informed news analysis and commentary to the general public. See the entire list of articles written by MSU faculty for The Conversation.

Over Christmas vacation in 1938, physicists Lise Meitner and Otto Frisch received puzzling scientific news in a private letter from nuclear chemist Otto Hahn. When bombarding uranium with neutrons, Hahn had made some surprising observations that went against everything known at the time about the dense cores of atoms – their nuclei.

Meitner and Frisch were able to provide an explanation for what he saw that would revolutionize the field of nuclear physics: A uranium nucleus could split in half – or fission, as they called it – producing two new nuclei, called fission fragments. More importantly, this fission process releases huge amounts of energy. This finding, at the dawn of World War II, was the start of a scientific and military race to understand and use this new atomic source of power. 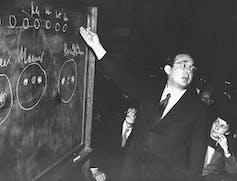 The release of these findings to the academic community immediately inspired many nuclear scientists to investigate the nuclear fission process further. Physicist Leo Szilard made an important realization: if fission emits neutrons, and neutrons can induce fission, then neutrons from the fission of one nucleus could cause the fission of another nucleus. It could all cascade in a self-sustained “chain” process.

Thus began the quest to experimentally prove that a nuclear chain reaction was possible – and 75 years ago, researchers at the University of Chicago succeeded, opening the door to what would become the nuclear era.

As part of the Manhattan Project effort to build an atomic bomb during World War II, Szilard worked together with physicist Enrico Fermi and other colleagues at the University of Chicago to create the world’s first experimental nuclear reactor.

For a sustained, controlled chain reaction, each fission must induce just one additional fission. Any more, and there’d be an explosion. Any fewer and the reaction would peter out. 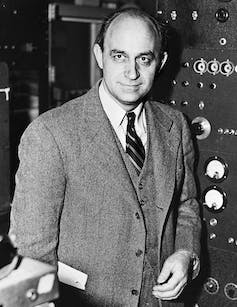 In earlier studies, Fermi had found that uranium nuclei would absorb neutrons more easily if the neutrons were moving relatively slowly. But neutrons emitted from the fission of uranium are fast. So for the Chicago experiment, the physicists used graphite to slow down the emitted neutrons, via multiple scattering processes. The idea was to increase the neutrons’ chances of being absorbed by another uranium nucleus.

To make sure they could safely control the chain reaction, the team rigged together what they called “control rods.” These were simply sheets of the element cadmium, an excellent neutron absorber. The physicists interspersed control rods through the uranium-graphite pile. At every step of the process Fermi calculated the expected neutron emission, and slowly removed a control rod to confirm his expectations. As a safety mechanism, the cadmium control rods could quickly be inserted if something started going wrong, to shut down the chain reaction.

Chicago Pile 1, erected in 1942 in the stands of an athletic field at the University of Chicago.  Argonne National Laboratory, CC BY-NC-SA

They called this 20x6x25-foot setup Chicago Pile Number One, or CP-1 for short – and it was here they obtained world’s the first controlled nuclear chain reaction on December 2, 1942. A single random neutron was enough to start the chain reaction process once the physicists assembled CP-1. The first neutron would induce fission on a uranium nucleus, emitting a set of new neutrons. These secondary neutrons hit carbon nuclei in the graphite and slowed down. Then they’d run into other uranium nuclei and induce a second round of fission reactions, emit even more neutrons, and on and on. The cadmium control rods made sure the process wouldn’t continue indefinitely, because Fermi and his team could choose exactly how and where to insert them to control the chain reaction. 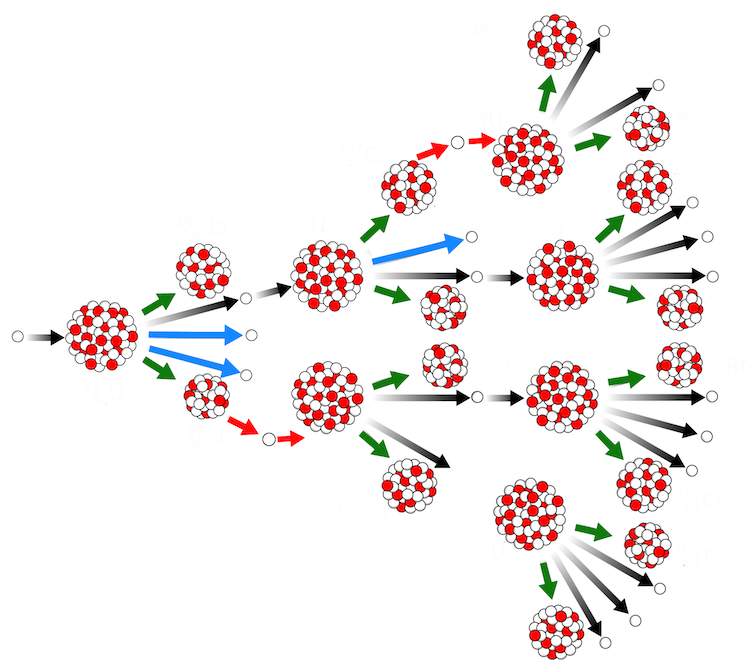 A nuclear chain reaction. Green arrows show the split of a uranium nucleus in two fission fragments, emitting new neutrons. Some of these neutrons can induce new fission reactions (black arrows). Some of the neutrons may be lost in other processes (blue arrows). Red arrows show the delayed neutrons that come later from the radioactive fission fragments and that can induce new fission reactions. MikeRun modified by Erin O’Donnell, MSU, CC BY-SA

Sometimes, a few seconds after the fission occurs in a nuclear chain reaction, additional neutrons are released. Fission fragments are typically radioactive, and can emit different types of radiation, among them neutrons. Right away, Enrico Fermi, Leo Szilard, Eugene Wigner and others recognized the importance of these so-called “delayed neutrons” in controlling the chain reaction.

If they weren’t taken into account, these additional neutrons would induce more fission reactions than anticipated. As a result, the nuclear chain reaction in their Chicago experiment could have spiraled out of control, with potentially devastating results. More importantly, however, this time delay between the fission and the release of more neutrons allows some time for human beings to react and make adjustments, controlling the power of the chain reaction so it doesn’t proceed too fast. 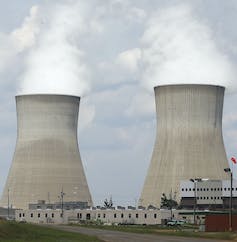 The events of December 2, 1942 marked a huge milestone. Figuring out how to create and control the nuclear chain reaction was the foundation for the 448 nuclear reactors producing energy worldwide today. At present, 30 countries include nuclear reactors in their power portfolio. Within these countries, nuclear energy contributes on average 24 percent of their total electrical power, ranging as high as 72 percent in France.

CP-1’s success was also essential for the continuation of the Manhattan Project and the creation of the two atomic bombs used during World War II.

The quest to understand delayed neutron emission and nuclear fission continues in modern nuclear physics laboratories. The race today is not for building atomic bombs or even nuclear reactors; it’s for understanding of basic properties of nuclei through close collaboration between experiment and theory.

Researchers have observed fission experimentally only for a small number of isotopes – the various versions of an element based on how many neutrons each has – and the details of this complex process are not yet well-understood. State-of-the-art theoretical models try to explain the observed fission properties, like how much energy is released, the number of neutrons emitted and the masses of the fission fragments.

Delayed neutron emission happens only for nuclei that are not naturally occurring, and these nuclei live for only a short amount of time. While experiments have revealed some of the nuclei that emit delayed neutrons, we are not yet able to reliably predict which isotopes should have this property. We also don’t know exact probabilities for delayed neutron emission or the amount of energy released – properties that are very important for understanding the details of energy production in nuclear reactors.

In addition, researchers are trying to predict new nuclei where nuclear fission might be possible. They’re building new experiments and powerful new facilities which will provide access to nuclei that have never before been studied, in an attempt to measure all these properties directly. Together, the new experimental and theoretical studies will give us a much better understanding of nuclear fission, which can help improve the performance and safety of nuclear reactors. 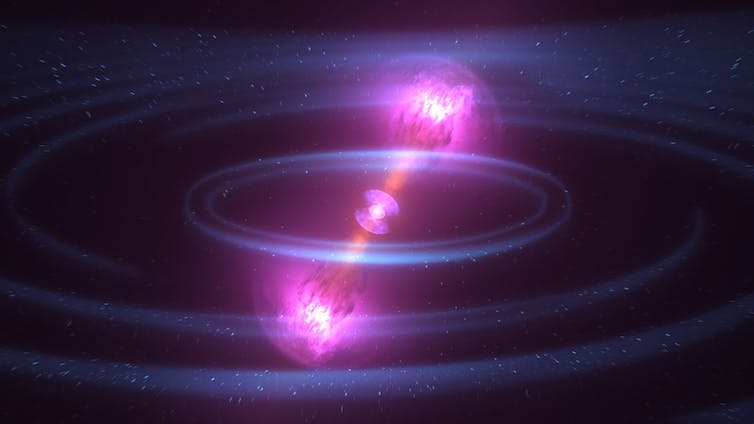 Both fission and delayed neutron emission are processes that also happen within stars. The creation of heavy elements, like silver and gold, in particular can depend on the fission and delayed neutron emission properties of exotic nuclei. Fission breaks the heaviest elements and replaces them with lighter ones (fission fragments), completely changing the element composition of a star. Delayed neutron emission adds more neutrons to the stellar environment, that can then induce new nuclear reactions. For example, nuclear properties played a vital role in the neutron-star merger event that was recently discovered by gravitational-wave and electromagnetic observatories around the world.

The science has come a long way since Szilard’s vision and Fermi’s proof of a controlled nuclear chain reaction. At the same time, new questions have emerged, and there’s still a lot to learn about the basic nuclear properties that drive the chain reaction and its impact on energy production here on Earth and elsewhere in our universe.

This article was originally published on The Conversation. Read theoriginal article.