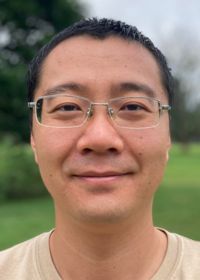 MSU Department of Biochemistry and Molecular Biology postdoctoral trainee Pengxiang Fan collaborated with other graduate students from the Department of Plant Biology to reveal the biochemical and genetic story of two enzymes responsible for turning sugar into a defensive chemical in tomatoes. Courtesy photo

Plants, herbivores and pathogens are locked in a war for survival that is hundreds of millions of years old. Rooted in place and with no way to run, plants evolved complex, chemical-producing machinery in their cells to defend against their ambulate adversaries.

In a paper recently published in the journal eLife, Pengxiang Fan, MSU postdoctoral trainee studying biochemistry and genetics, and Robert Last, Barnett Rosenberg Professor in the Department of Biochemistry and Molecular Biology, reported the discovery of two, ancient tomato enzymes recruited to play a crucial role in the ongoing evolutionary arms race.

“Plants have evolved to engage in chemical warfare with herbivores and pathogens. Many of these poisons are not particularly toxic to humans or vertebrates who eat them, but they clearly defend the plant against pathogens and insects,” said Last, a pioneer in high-throughput genetic screening techniques who has spent 15 years investigating the biochemistry of specialized metabolites in Solanaceae, or nightshades, an incredibly important food source that includes potatoes, tomatoes, eggplants, bell and chili peppers.

“I was fascinated when I joined the Last Lab seven years ago because they were studying specialized metabolites known as acylsugars,” Fan explained. “Basically, tomato enzymes turn sweet sugar into a defensive chemical known as acylsugars, and I thought this was amazing!” 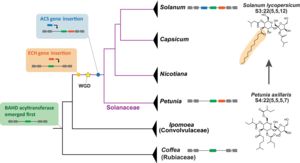 The evolutionary history of the acylsugar gene cluster and its relation to the acylsugar acyl chain diversity in the nightshade family. Credit: Pengxiang Fan

About 20-30 million years ago, Solanaceae “hijacked” two ancient enzymes involved in fatty acid metabolism to turn sucrose into the sticky, natural pesticide. Unlike other members of the Solanaceae family that rarely produce acylsugars with more than 10 carbon chains, the cultivated tomato produces fatty acylsugar chains with 2-12 carbons.

Through comparative genomics, biochemical analysis and CRISPR-Cas9 gene editing approaches, the researchers identified a gene cluster with two genes responsible for encoding enzymes that produce the long chain acylsugars in tomato. The two enzymes, known as AACS and AECH, are sequestered at the tips of tiny glandular hairs on the fruit called trichomes where they manufacture acylsugars before they are secreted onto the surface.

“Primary metabolites such as fatty acids are produced everywhere in plant tissues, but these two enzymes’ expression is restricted to the glandular hair, an important step to being recruited to acylsugar biosynthesis,” said Fan. “If the genes were expressed everywhere in the plant, it would disrupt general fatty acid metabolism and interfere with the membrane lipids. Being limited to the trichome tip cell allows its long acyl chains to be incorporated into acylsugars without harming the plant.”

The cell machinery of these oozing hairs became the focus of Fan’s quest to understand how variation of acylsugar forms in the Solanaceae family evolved, and it required a diverse collaboration of labs and disciplines.

“I wanted to dig deep to fully understand how these chemicals are made and that required different kinds of scientific perspectives,” Fan said. “I am a biochemist and geneticist, and I was eager to collaborate with cell biologists and bioinformaticians.”

Collaborating with postdoctoral researcher Peipei Wang from professor Shinhan Shiu’s lab in the Department of Plant Biology, Fan used bioinformatics tools to recreate the evolutionary events that sequentially recruited the two genes into a specific genomic region in the tomato and gave rise to the various acylsugar chain lengths across the Solanaceae family. Their efforts pinpointed the enzymes responsible for making a precursor of the long chain acylsugars—the acyl-CoAs known as AACS and AECH.

Next, Fan wanted to know where the two acyl-CoA producing enzymes rendezvous with sucrose to produce acylsugars. Normally, sucroses are readily available in the cytoplasm, whereas acyl-CoAs can be made in a variety of cell compartments.

Collaborating with Peingfei Cao, a graduate student in the laboratory of MSU Foundation Professor Frederica Brandizzi at the MSU-DOE Plant Research Laboratory, the scientists were able to track the acyl-CoA producing enzymes. Unexpectedly, they found them in the energy producing part of the cell, the mitochondria. This was an important discovery for understanding how two enzymes usually involved with fatty acids and lipids were hijacked into making protective acylsugars.

“This study reveals many of the ‘tricks’ that evolution uses to generate plant metabolic diversity: modifying old enzymes to produce new products, clustering genes involved in that diversification for reasons that we do not fully comprehend and confining the biosynthesis in specialized cell types in an unexpected place within the cell,” explained Last.

In the future, Fan hopes to delve even further into the myriad types of acylsugar enzymes found in the Solanaceae family.

“We can extend the story of these two enzymes to other species for future improvement,” Fan said. “If we can figure out what types of acylsugars are most effective in plant defense and manipulate that, we can potentially design effective, natural pesticides to defend crops form insects and pathogens.”