The field of theatre has long been one that favors the extrovert with a perception that actors must be outgoing, gregarious, and boisterous to find success. A new book seeks to alter that perception. Co-written by Rob Roznowski, Head of Acting and Directing for the MSU Department of Theatre, The Introverted Actor: Practical Approaches offers first-hand accounts, methods, and tested techniques that will enable directors and educators to create balance between introverts and extroverts in rehearsal spaces and classrooms.

“I think most people, when thinking of the stereotypical theatre students, envision a bunch of loud people making each other laugh, singing and performing constantly,” Roznowski said. “But…there is also another group of introverts sitting over there reading scripts. They’re having just as good a time and they have just as much passion for theater.”

An award-winning actor, director, writer, and educator, Roznowski is recognized for creating innovative teaching environments. His research examines the intersection of acting and psychology. He also identifies as an introvert.

When he first read the 2012 New York Times best-selling book, Quiet: The Power of Introverts in a World That Can’t Stop Talking by Susan Cain, he says, “My mind was blown. I realized that I am, in fact, an introvert pretending to be an extrovert. The book really caused a revolution in both the corporate world and in education, but I hadn’t seen that impact in the theatre world.”

Roznowski decided to work to change that. He started by writing a chapter for the book “Creativity in Theatre: Theory and Action in Drama/Theatre Education.” In writing the chapter, entitled “Reforming Theatrical Education from its Extrovert-Based Model,” he examined the ways in which he had been teaching theatre.

“I had been teaching in a model that was standardized and created by people who had rewarded novelty; people that can react very quickly,” he said. “I finished the chapter and I realized I had so much more to do and so much more to write.”

Roznowski invited MSU alumna Carolyn Conover (MFA Theatre ’16), who had edited and contributed to his previous two books, to join the project. He then reached out to Cain’s organization, A Quiet Revolution, and connected with their Director of Education, Heidi Kasevich, who designs and delivers temperament-inclusive programs for schools and workplaces nationwide. She visited Michigan State University in fall 2018 as a guest lecturer to observe an acting classroom. Kasevich’s observations confirmed how heavily theatre classrooms were structured to favor the extrovert. Together, they worked to test changes to the Department of Theatre syllabi and teaching practices. The Introverted Actor: Practical Approaches is the result of the first deep study into changes in curricula to create parity for introverts and extroverts in theatre.

As part of the research for the book, a survey was sent out globally to a cross-section of professional actors, professional educators, and student actors who identify as introverts, extroverts, and ambiverts. It received more than 400 respondents.

The book includes interviews with world-renowned theatre artists such as Rodney Cottier, Head of Drama at the London Academy of Music and Dramatic Art (LAMDA), in which he discusses how LAMDA’s small classes and physical approach benefit introverted actors.

Another chapter involves the transcript of an interview with Tony-nominated Broadway actor Jennifer Simard about her approach to the professional world. She shares a variety of ways to succeed in the more extroverted aspects of the business, emphasizing self-love, acceptance, and kindness.

The book also explores introversion in specific areas of theater including networking, rehearsals, performances, and auditioning.

“One of the things we piloted in the Department of Theatre auditions is a designated quiet space for introverts to prepare,” Roznowski said. “Notoriously, the room where people are waiting before they go into an audition is one of very loud extraversion and it can be incredibly intimidating. We created a place for introverts to go, regroup, and think about how to best present their work.” 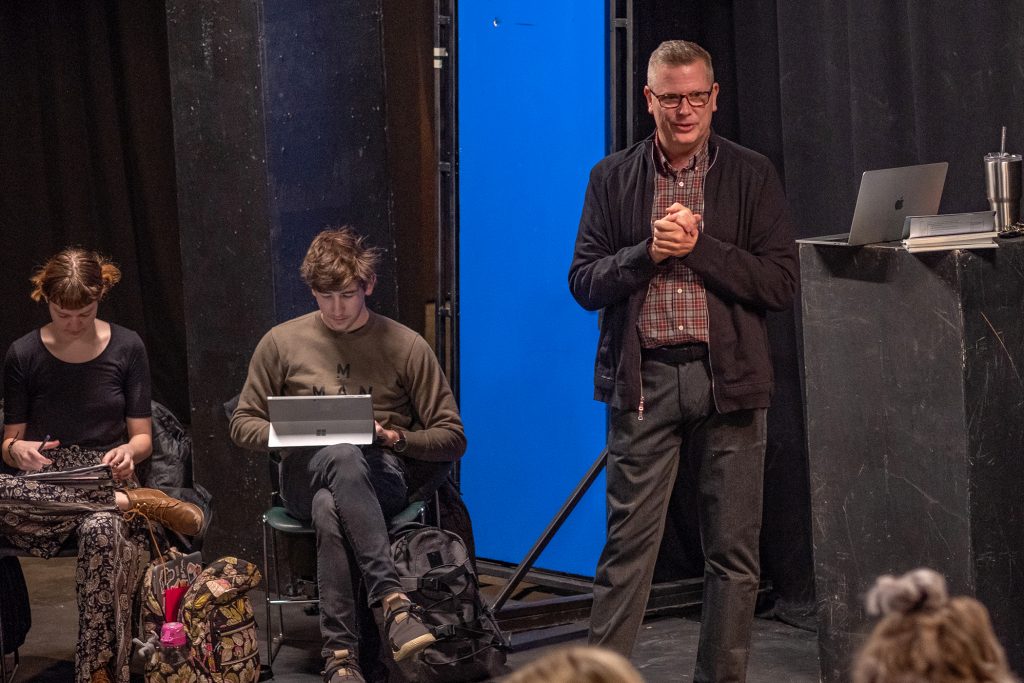 It’s not difficult to adapt your pedagogy to these techniques. It just takes a reframing of what you’re normally doing. It doesn’t add extra time to class, there is no e

xtra work or pressure. It’s an exercise in respecting all learning styles, which is something we as educators are always trying to do anyway.

Many actors feel they are on the periphery because of their introversion. Roznowski says the book will help actors advocate for their professional self by drawing attention to the benefits of introversion that can lead to success in the theatre business. An example of this is the concept of “becoming another.” Many actors find it far easier to play a character than to be themselves on stage. There is a thrill for an introverted actor in visiting a world of extraversion through the safety net of a script.

“You can do outlandish, loud, extroverted things because it’s not necessarily as draining as real social interaction,” Roznowski said. “Having a script removes the mental task of thinking ahead or judging yourself.”

The student feedback from the piloted techniques within MSU’s Department of Theatre has been very positive as Roznowski has watched introverts and extroverts learn from each other. Adding these practices to the classroom is something he hopes all theatre educators will do.

“It’s not difficult to adapt your pedagogy to these techniques,” he said. “It just takes a reframing of what you’re normally doing. It doesn’t add extra time to class, there is no extra work or pressure. It’s an exercise in respecting all learning styles, which is something we as educators are always trying to do anyway.”

The Introverted Actor: Practical Approaches was published by Palgrave Macmillian and will be available July 1.