Electron movement – what scientists call electron transfer – powers many of life’s functions. For example, a good deal of the energy we derive from the foods we eat is captured by a process that removes electrons from food molecules, like sugar or fat, and transfers them to the oxygen we breathe.

Scientists are trying to harvest electricity from biology to power our technologies and produce new products, such as high-value medical compounds and hydrogen gas as a clean fuel source. Although we have a lot of ability to control electron transfer in metals or semiconductors, for example in batteries, our control over electrons in living, biological systems is more limited. Researchers know a lot about electron transfer over very small distances—say across tens of atoms—but the process of moving electrons over larger distances—even the length of one cell—remains somewhat of a mystery.

In a new study, recently published in the Journal of the American Chemical Society, the labs of David M. Kramer, Michigan State University John A. Hannah Distinguished Professor, and Daniel Ducat, associate professor, in the MSU-DOE Plant Research Laboratory explore how electrons can move across long distances within biomaterials, such as proteins. Understanding the factors that control electron transfer (ET) in a biological context is critical to advances in diverse fields, including bioenergy, biosynthesis and disease. 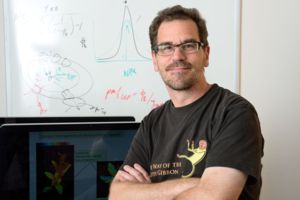 In a new study, David Kramer, an expert in bioenergetics and photosynthesis electron and proton transfer reactions, and his colleagues are examining long-range electron transfer and its potential applications from medicines to sustainable energy production. Photo: Harley J. Seeley

“One common way cells move electrons is to shuttle them around on small protein electron carriers,” explained Kramer, an expert in bioenergetics and photosynthesis electron and proton transfer reactions. “The carriers are ‘docking areas’ that carry the electrons around in a safe way around the cell. However, this method is not very efficient because it is undirected; the electrons move in a random way. Also, if oxygen encounters these proteins, it can hijack the electrons and form toxic reactive oxygen species that can kill the cell.”

These issues have caused scientists to grapple with how to safely target the movement of electrons from one point to another.

In the study, the labs report a new solid-state system that does just that. It consists of billions of biological electron carriers (cytochromes, named for their vivid red colors) arranged in a 3D crystal so that their electron carrying centers, called hemes, are nearly in contact with each other. Electrons added into one part of the crystal rapidly hop from one carrier to another, moving across the entire length of the crystal.

The new system mimics that of one found in some bacteria, such as Shewanella. These organisms have evolved structures, called nanowires, that allow electrons to move over fairly long distances, about as long as a typical bacterial cell. The new crystal nanowires are so much longer in comparison that one can see them with the naked eye.

The team will use this system — the first direct test of its kind — to examine the challenges behind long-range electron transfer. 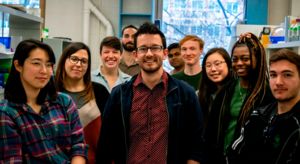 Daniel Ducat (center) is part of a team that is trying to harvest electricity from biology to power our technologies and produce new products, such as high-value medical compounds and hydrogen gas as a clean fuel source. Photo: Victor DiRita, Jr.

“When a system contains thousands of loose parts, electron transfer is impacted by many factors,” said Jingcheng Huang, co-author and research associate in both the Kramer and Ducat labs. “The larger the system, the more unpredictable the electron transfer, compared to a single point-to-point jump.

“Without a physical model to work with, such as our crystals, it’s hard to extrapolate the dynamics of short jumps onto larger surface areas,” Huang said. “Our challenge will be to figure out how to efficiently move electrons over long distances on the biological scale, such as microns, which is necessary to create this futuristic microbial cell factory or power generation system.”

To help with this, the team is using video to examine how efficiently electrons travel across these distances.

“One very beautiful thing about the crystal wires is that we can make videos of the electrons moving,” Kramer said. “When an electron is on a heme carrier, the carrier changes its color. We can see electrons moving in real time with a simple video camera. This allows us to test whether the theory developed for short distance transfer can work over longer distances. In fact, the work suggests that some new, and unexpected, factors may become important in these solid-state systems. This new knowledge is pointing the way toward engineering better wires.”

The long-range game with these crystalline wires is to harness the electricity for useful applications.

One idea is to connect two kinds of living cells that would be normally incompatible. For example, a cell that stores energy by photosynthesis could ‘wire’ the energy to another cell that uses it to make useful products. The wire link would allow both reactions to safely occur in the same space since photosynthesis makes oxygen, which is toxic to many organisms.

“Indeed, some scientists think that if we can better understand and control the flow of electrons from living organisms, we could build systems where living cells directly communicate with electronic devices,” Ducat added. “This idea may be quite a way off, however such bio-hybrid devices could have a range of applications, from medicines to sustainable energy production.”