The Michigan State University research enterprise has experienced strong growth over the past decade as exhibited in the total research and development expenditures chart. 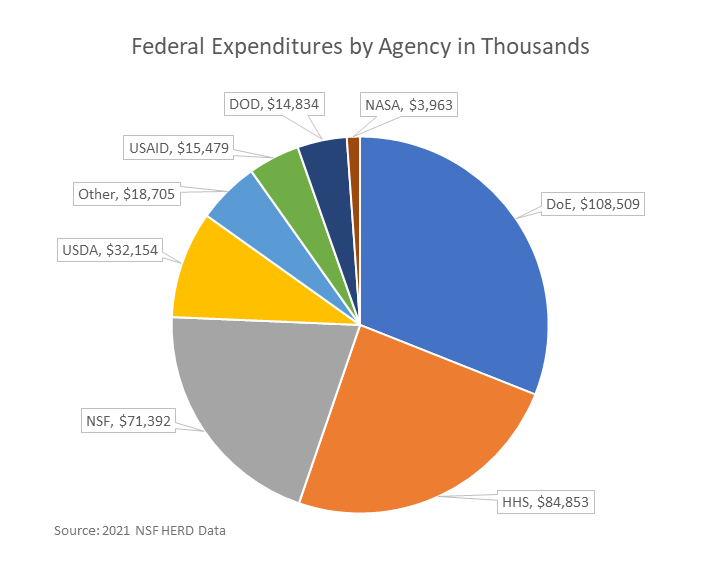 MSU ranks #1 in the Big 10 and #1 nationally in Department of Energy expenditures.

Major contributors include the MSU and U.S. Department of Energy-funded Facility for Rare Isotope Beams (FRIB) as well as the MSU-DOE Plant Research Laboratory, the Great Lakes Bioenergy Research Center and several other interdisciplinary and multi-institutional research projects that are DOE funded.

MSU ranks #4 in the Big 10 and #15 nationally for National Science Foundation expenditures.

MSU continues its leadership in USAID expenditures at #1 in the Big Ten and #2 nationally. 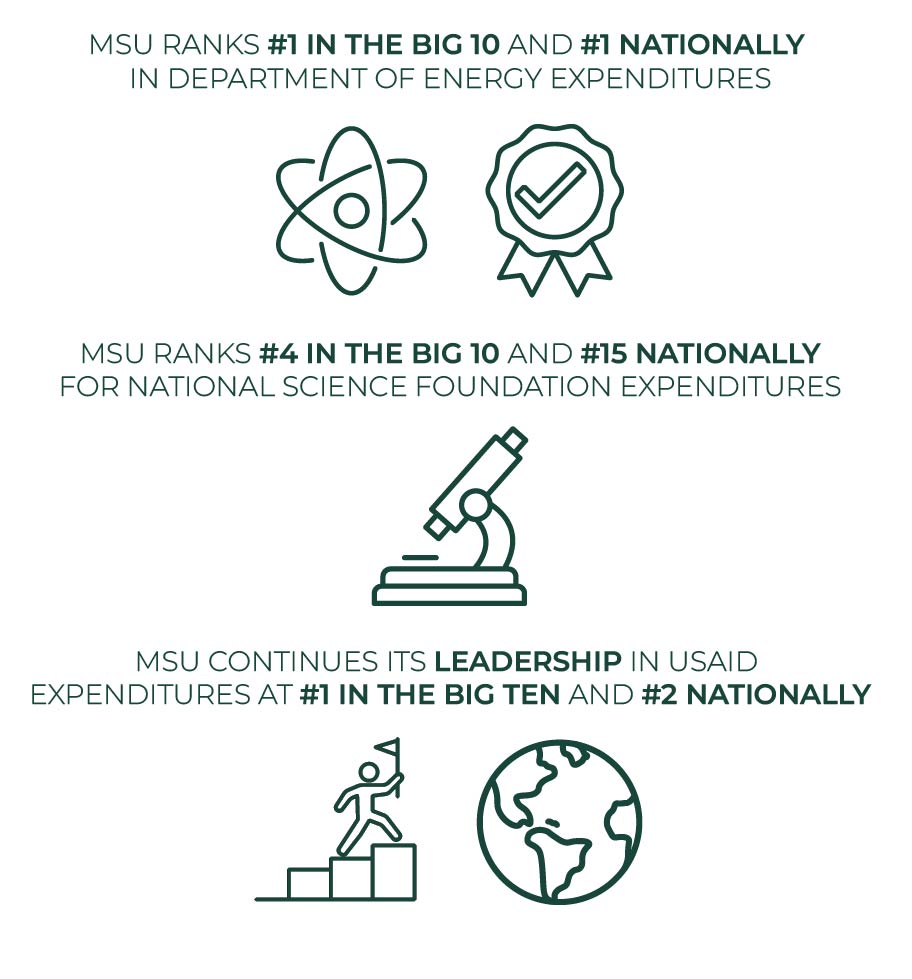 Funding for externally sponsored programs comes primarily from federal agencies, state agencies, industry, associations, and foundations. Competitive internal grants programs and Facilities and Administrative (F&A) cost return also support research. Funds for conducting research are generally awarded in multi-year contracts or grants, therefore the amount recorded as received each year may not reflect the research being done in that year.

For additional facts and figures about the MSU research enterprise, or statistics about the university, please review the Data Digest or Planning Profile Summary, produced by the MSU Office of Planning and Budgets.

The MSU Innovation Center stewards scientific and creative discoveries into a pipeline of patents, products and startup businesses. In FY 2022, the MSU Innovation Center recorded 157 invention disclosures, and 55 new patent applications along with 52 US issued patents. Productivity resulted in $25.1M dollars in corporate support for research projects. Additionally, $4M in income from licenses was generated through royalties distributed back to MSU faculty and departments.

The university attracts and welcomes an international community of outstanding graduate students, postdoctoral associates, and faculty visitors to a broad range of highly ranked graduate programs, research centers, and interdisciplinary collaborations. As of Fall 2020, approximately 5,300 faculty and academic staff with 1,885 tenure-stream faculty were among our community of scholars.

The Facility for Rare Isotope Beams (FRIB)—a $730M scientific user facility funded by the U.S. Department of Energy Office of Science, MSU, and the state of Michigan—will advance nuclear physics and provide research opportunities for scientists and students from around the globe. FRIB opened in spring 2022, ahead of schedule and on budget.

IceCube is the world’s largest neutrino detector, using a billion tons of the Antarctic ice cap beneath the U.S. Amundsen-Scott South Pole Station to observe neutrinos. It is operated by a collaboration of 300 physicists from 48 universities and national laboratories in 12 countries. MSU is a major participant in this NSF research facility and will help lead an NSF-funded $300M expansion. 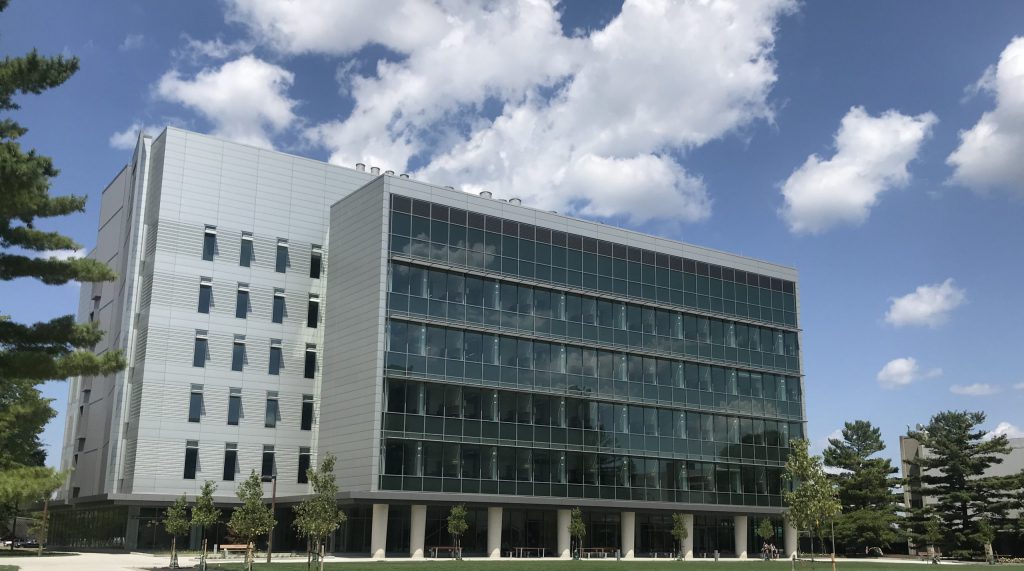 The Interdisciplinary Science and Technology Building opened in August 2019.

New in 2016, the Institute for Quantitative Health Science and Engineering (IQ) aims to foster collaboration among the sciences on campus and beyond, creating endless possibilities for transforming patient care with new biomedical discoveries. IQ has grown to more than 36 faculty in 16 departments (six colleges) with additional affiliated faculty across campus. MSU recruited IQ director Chris Contag from Stanford and Precision Medicine chair Anna Moore from Harvard.

The new Interdisciplinary Science and Technology Building opened in August 2019, is a neighbor to IQ, and together with Life Sciences, Radiology, and the Clinical Center, forms a dedicated biomedical research complex on south campus. It currently houses the Precision Health Program among other interdisciplinary groups.

McLaren Health Care's new hospital facility on the campus of MSU opened in early 2022. The comprehensive health care campus is home to more than 1,000 physicians, researchers, educators and other members of the academic and medical team.

Grand Rapids Research Center was completed in 2017 with space for 44 research teams in translational science and molecular medicine, pediatrics, and OBGYN. An additional building next door recently broke ground for expanded research collaborations with Spectrum Health, the Van Andel Institute and others.

Launched in 2015, the department of Computational Mathematics, Science, and Engineering or CMSE was planned, authorized, and operational in only three years. CMSE is unique among computational academic units nationally - it is focused on data science, machine learning, advanced computation and related applications, but is not a traditional CS department. It supports many of the new efforts on campus that require the analysis of large data sets and development of new tools and algorithms.

The Plant Resilience Institute was formed in 2016 under the Global Impact Initiative. Its mission is to enhance plant resilience to environmental challenges including extremes in weather and climate change, and to become a “Center of Excellence” for foundational and translational plant research aimed at increasing the productivity and quality of food and energy crops.

The Minskoff Business Pavilion, opened in fall 2019, will enhance the Broad student experience through its design around community, collaboration and teamwork. The space provides  resources for research, innovation and the development of transformational business leaders.

The Billman Music Pavilion in the College of Music opened in 2021. The new facility and renovated space in the Music and Music Practice buildings will enhance student learning with advanced acoustical engineering and custom designed spaces within a climate-controlled environment.