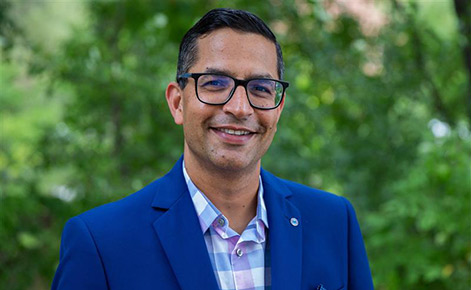 Michigan State University Professor Aman Yadav, known for his research and outreach on computer science education and computational thinking, has been named Lappan-Phillips Professor of Computing Education at MSU.

Yadav was also recently named the associate director of computer science education for the CREATE for STEM Institute, a collaboration between the College of Natural Science and the College of Education that seeks to improve teaching and learning of science and mathematics through innovation and research.

Yadav has led work in Michigan and beyond to advance and improve computer science education equity and access in K-12 schools. Since joining the College of Education faculty in 2014, Yadav has received more than $14 million in funding to support related evidence-based research initiatives from funders including Apple, the National Science Foundation and the Robinhood Foundation.

“This appointment represents a tremendous career milestone for Professor Yadav, and for good reason,” said Jerlando F. L. Jackson, dean of the MSU College of Education and MSU Foundation Professor of Education. “One of the major agenda items for the United States’ workforce is declining participation rates in the scientific workforce, which represents the employment segment with the most growth potential. One key strategy for responding is the broadening of participation of the scientific workforce with women and people of color. Professor Yadav’s research and advocacy in this critical space places the College of Education, College of Natural Science and Michigan State University at the center of these discussions.”

Yadav has also recently partnered with the Computer Science for All Accelerator program and Kapor Center to bring high quality computer science to youth in Detroit. The nationwide CSforALL initiative provides resources for K-12 computer science education. Yadav, who earned a master’s in electrical engineering (2001) and a Ph.D. in educational psychology and educational technology (2006) from MSU, has been committed to CSforALL initiatives on behalf of the college since 2016.

“Congratulations to Professor Yadav on his appointment as a Lappan-Phillips Professor with joint appointments in the College of Education and the College of Natural Science,” said Phil Duxbury, dean of the MSU College of Natural Science. “This prestigious position recognizes [his] scholarship and impact in computer and computational science, education technology and pedagogy. His interests span K-12 and college education in these areas, with a particular emphasis on learning environments supporting broad participation while serving the rapidly growing needs of the economies of the 21st century.”

Support for the professorship comes from the Connected Mathematics Project 2 Fund at MSU. The fund was created with royalties received from the Connected Mathematics 2 textbook, the single most widely used mathematics textbook in America for students in grades 6-8, which was developed by MSU mathematics educators Glenda Lappan and Elizabeth Phillips. Lappan and Phillips gifted their portion of the royalties to establish the fund.

Yadav will be formally recognized during an investiture ceremony this September.

This story originally appeared on the College of Education website.