Greetings. I’d like to report on a number of research-related developments happening across campus.

At their December meeting, the MSU Board of Trustees gave the approval to proceed with construction of the Interdisciplinary Science and Technology Building, a 170,000-square-foot facility, which will play a key role in support of MSU’s Global Impact Initiative. Its location, adjacent to the Bio Engineering and Life Sciences buildings and other core research facilities, will allow the new facility to play an integral role in MSU’s development of a neighborhood for scientific research in the biomedical and biological sciences. The project is expected to cost about $100 million and will come from the general fund. Construction will begin August 2017 and is projected to be finished in August 2019. The rendering below depicts the Grand Rapids Research Center, which will be used as the model for design of the new Interdisciplinary Science and Technology Building. 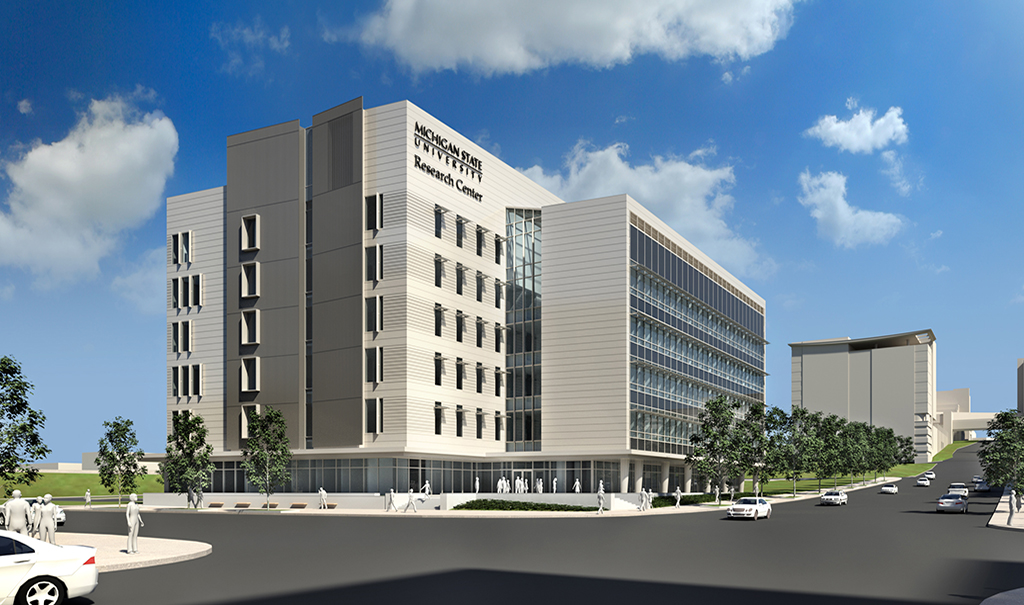 A recent cooperative agreement between Michigan State University and the National Science Foundation will result in up to $122.5 million in continued funding over five years for the National Superconducting Cyclotron Laboratory. The new funding will cover the period until the under-construction Facility for Rare Isotope Beams becomes operational, which is expected to be in 2021.

A $4.8 million grant awarded from the National Institutes of Health will help Michigan’s top three research universities (MSU, Michigan and Wayne State), Henry Ford Health System, and the Michigan Department of Health and Human Services, investigate how exposure to a range of environmental factors in early development influences the health of children and adolescents. Nigel Paneth, University Distinguished Professor of epidemiology and biostatistics in the MSU College of Human Medicine, will lead the group of five co-principal investigators of the NIH ECHO initiative (Environmental Influences on Child Health Outcomes).

Michigan State University assistant professor Jose Perea is the principal investigator on a collaborative research project funded by the Defense Advanced Research Projects Agency (DARPA). A two-year, $1,637,726 DARPA grant has been awarded to MSU and five other universities to develop novel computational, geometric and topological tools to represent complex spatio-temporal dynamics in a way that allows for control and prediction of the underlying physical systems including turbulent systems and the dynamics of dense granular media.

Michigan State had a record-setting year in terms of technology transfer,  including 179 inventions disclosed, 66 annual licenses and options filed, and $1.4M in royalties distributed to faculty and departments. For more details and to read about the Innovators of the Year, view the MSU Innovation Center 2016 Annual Report.

Congratulations to Emilio Moran, Hannah Distinguished Professor, Department of Geography, Environment and Spatial Sciences, the Center for Global Change and Earth Observations, and the Center for Systems Integration and Sustainability. He was appointed by former President Obama to serve on the National Science Board of the National Science Foundation. The 24-member board and the NSF director are jointly responsible for recommending and encouraging the pursuit of national policies for the promotion of research and education in science and engineering. The board also influences the research direction of the NSF and acts as an independent body of advisers to both the president and Congress on matters of policy.

The Office of Regulatory Affairs has good news to share with the MSU research community: Recent visits by accrediting organizations have resulted in Full Accreditations of the MSU Animal Care Program and the Human Research Protection Program. The Association for the Assessment and Accreditation of Laboratory Animal Care visited the MSU campus in June. At the September Council Meeting, Full Accreditation was awarded. The Association for the Accreditation of Human Research Protection Programs site visit was conducted in September, and their Council awarded Full Accreditation in December. In addition, the Nuclear Regulatory Commission paid MSU a surprise visit in December. No major findings were reported as a result of the visit.

Based on suggestions from college research associate deans, this list highlights select awards announced since August 2016. To read more about these stories and others, visit the Awards and Announcements sections of the MSU Research website and please contact our communications staff if you have submissions to be added.